One of our customers required predictive maintenance (PdM) of their large grid transformer in order to detect any issues that may cause equipment failure. Their goal was to determine whether corrective action is required and, if so, to take that action before any equipment failure.

The costs associated with a failure of grid transformer were estimated to be as high as €180,000/hour.

As part of their predictive maintenance works, the Maintenance Team carried out Thermography Survey of the electrical equipment and components.  During the survey an abnormal thermal pattern in one of the 38 kV connections was detected as per image below. 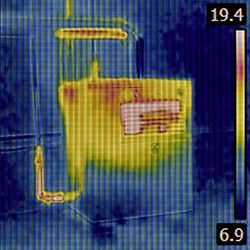 This discovery was immediately brought to the facility manager’s attention, who then subsequently arranged for a shutdown of power at the next available opportunity, to further inspect and to carry out repair work.

If this connection had failed, not only was there a risk that it could cause a significant damage to the transformer, but could also have resulted in a loss of production which could have counted in hundreds of thousands of euro.

Thermal imaging is unobtrusive, efficient and straight forward when carried out by qualified and experienced Thermographer that can prevent downtime and potentially huge financial losses.

This website uses cookies to improve your experience while you navigate through the website. Out of these, the cookies that are categorized as necessary are stored on your browser as they are essential for the working of basic functionalities of the website. We also use third-party cookies that help us analyze and understand how you use this website. These cookies will be stored in your browser only with your consent. You also have the option to opt-out of these cookies. But opting out of some of these cookies may affect your browsing experience.
Necessary Always Enabled
Necessary cookies are absolutely essential for the website to function properly. This category only includes cookies that ensures basic functionalities and security features of the website. These cookies do not store any personal information.
Non-necessary
Any cookies that may not be particularly necessary for the website to function and is used specifically to collect user personal data via analytics, ads, other embedded contents are termed as non-necessary cookies. It is mandatory to procure user consent prior to running these cookies on your website.
SAVE & ACCEPT