To ensure an earthing system will be adequate for the protection of personnel, plant and the public it must be well designed from the beginning, to ensure all possible scenarios are considered and allowed for. Enersol uses the powerful earthing and grounding system software CDEGS™ to allow new earthing systems to be fully designed and modelled for performance.

Design of an earthing system is with strict adherence to relevant Australian Standards  such as AS2067-2008, AS3835.1, AS3835.2 and AS3000 as well as International Standard IEEE80 and Energy Network Association Document ENA ¬ EG1 2006. By following the requirements and guidelines of these documents it is possible to create an earthing system offering the highest degree of safety, by reducing earthing system impedance to the general mass of earth, limiting Earth Potential Rise (also know as Earth Grid Voltage Rise) and minimising Step and Touch Potentials in the area. 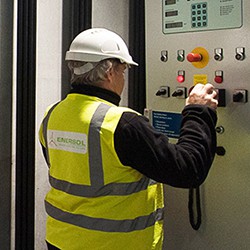 A proper earthing design and earth testing regime is essential to ensuring the safety of personnel, plant and the public in the event of a power system fault or lightning strike. There are many conditions under which a power system fault can impress a voltage upon an earthing system with the two most common being through lightning strikes (causing flashover or diverted to earth through surge arrestors) and live conductors inadvertently contacting earth.

When this occurs, the resultant current gives rise to an increase in the earth potential in the immediate area around the fault. Having an earthing system that is adequately designed and properly maintained will offer protection to personnel, plant and the public by limiting the voltage rise and directing the current flow into the general mass of earth. An earthing system that directs current flow into the general mass of earth with little resistance or impedance also allows for correct operation of protection devices ensuring any faults are cleared in the minimum time possible offering maximum safety and ensuring power system stability.

Contact us today to find out how we can help you